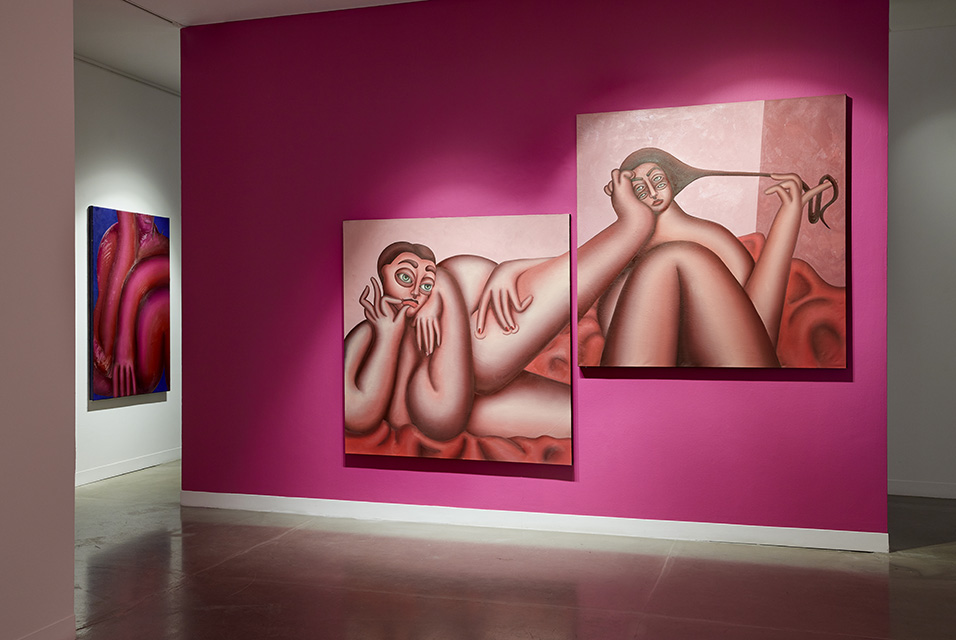 JD Malat Gallery is presenting the solo exhibition ‘Under our Together’ by Georgia Dymock, open from 11th March until 9th April 2022. In this new display of works, the young female British artist engages the audience with captivating art deco-esque surrealist figures, which bridge the physical and digital realms.

In honour of International Women’s Day, JD Malat Gallery has also partnered with the public art platform W1 Curates to showcase Dymock’s work across Flannel’s flagship store on Oxford Street from 7th until 20th March. The collaboration displays her new body of work on a monumental scale, allowing the London public to engage with the intricacies of her captivating work.

Born in Derbyshire and based in London, contemporary artist Georgia Dymock (b.1998) is currently pursuing her MFA in painting at UCL, Slade School of Fine Art. With a BSc in Anthropology, Dymock uses her studies and their influence to create her human hybrid-entity figures that question identity and the female form.

‘Under our Together’ includes twelve new works, all of which are initially digitally rendered and later executed using oil on canvas. The pieces showcase Dymock’s signature style of curvy contorted figures, marked by her thoughtful brushstrokes. Her painterly technique explores the constant push-pull relationship between the physical and virtual world, making Dymock’s work intellectually and visually stimulating. When asked about the title of the show, she states “the flesh that marks out the figurative elements in my paintings both sticks to and challenges the idea of a surface as a defining boundary, the bodies are ambiguous as limbs slip, twist, and fuse into one another.”